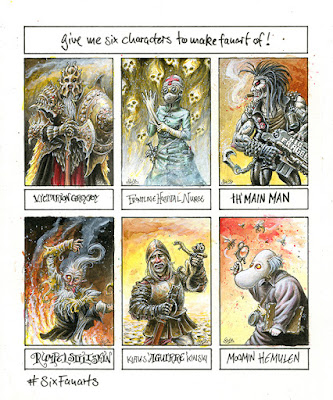 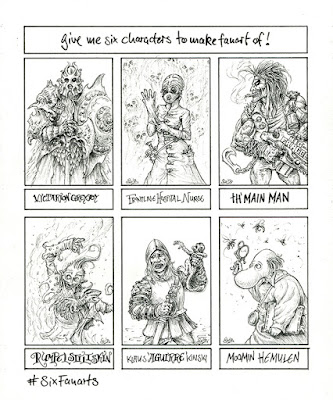 As for the characters themselves, doing my own take on each of them was actually more of a challenge than I would have thought. Here's little bit about them individually:

VICTARION GREYJOY
I have to admit, I've never read any of the Song of Fire and Ice stuff, so I did a bit of research online. I picked out a few details and features that sparked my interest and let my imagination take flight.

FRONTLINE HOSPITAL NURSE
Not really a character from popular culture, but certainly an interesting topic to explore... especially in these times. I figured going all grimdark with this would be more fitting than some sort of pin-up style character.

LOBO (TH' MAIN MAN)
Well, this dude is one of my favourite comic book characters ever, so I just had to draw him. Nothing fancy here, just most of the common attributes and bad yet playful attitude.

RUMPELSTILTSKIN
Funnily enough, a figure I've been thinking about lots in the past already. My wife suggested I should just do a self-portrait to represent the character. I have no idea why she would say something like that, but it's what I did anyway.

KLAUS 'AGUIRRE' KINSKI
Whenever I think of Klaus Kinski, I think of Aguirre, the wrath of god. Hard movie to watch (like most of the films he did with Herzog), but the craziness of his character is just wonderful. I don't feel like I've captured his likeness very well with this artwork, but I hope some of his character comes through.

MOOMIN HEMULEN
This was the last addition to my final six and was kind of a spur of the moment decision. I used to watch an animated series of the Moomins when I was just a wee lad – https://en.wikipedia.org/wiki/The_Moomins_(TV_series) – but it's more of a feeling that I remember, rather than the actual stories. One episode in particular shaped my perception of the Moomins, for it was quite dark and scary (or maybe the whole series was like that?)... which I loved even as a kid.

There you have it. Overall this was immense fun and great drawing/painting practice, but I had also grossly underestimated the exercise.
They probably turned out a tad "over engineered" as I like to call it, which sucks a bit of the energy and life out of the artwork. That is something I really wanna work on.

Will keep you posted on how it goes. ;)