I'm on a real roll at the moment, so here's another Blood Bowl match report from my exploits in the Munich RumBBL. 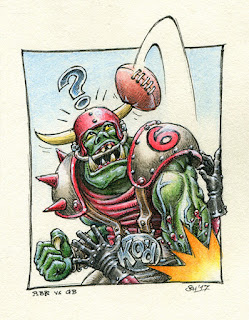 For their round 5 match of the Munich RumBBL Rookie Division, the Grünburg Bruisers had to travel far into the blasted wastelands of Lochhausen, which are home to the Red Bad Krunchaz.
That did nothing to deter the Bruisers' fans, who made up the majority of the 20,000 strong crowd, gaining their team +1 Fame for the match.

The effect of this tremendous fan support was felt at the first kick-off and the Humans started the half with 5 Re-rolls.
After receiving the kick, Grünburg set up to drive the ball straight up the field. Spotting a small gap in the Orc's defensive line, the attackers tried to push through... but the gap suddenly closed and the ball was knocked loose.
Lots of pushing and shoving ensued. A Black Orc was badly hurt after being trampled on by several Bruisers' players, one of which was promptly sent to the showers... despite the protestations from his coach.
Meanwhile, the ball was wildly bouncing around the pitch before becoming stuck on the horn of a Black Orc's helmet. Said Black Orc got such a fright, that he started running straight towards the Bruisers' endzone. His Human would be pursuers didn't manage to get past their markers, save for a lone Thrower. That just wasn't enough to stop a Black Orc on the move and the Bruisers found themselves 0:1 behind on the scoreboard.
There was still time left in the half, however, and the Humans were keen to get a quick start on the next drive. They managed to get a player in scoring position and moved the ball close enough for a pass. It all was a bit too rushed, though, and the ball was fumbled just past the line of scrimmage as the half ended.

After the break, it was the Orcs who opted for the Quick Snap at the kick-off, trying to steamroller the opposition into the turf.
The kick had gone deep and, even though the Krunchaz managed to recover the ball quickly and bring it up to the front of their line, their backfield was spread out pretty thinly. This allowed the Human defenders to put pressure on the ball carrier, who tried his best to dodge through the gaps around the line of scrimmage.
The Troll going stupid at a crucial moment gave the Bruisers the opening they needed to sack the ball carrier. The ball was loose once more and making his way around the pitch as though it had a mind of its own.
Eventually it was the Humans who managed to get their hands on it and make for the Krunchaz's end of the field. Despite some desperate defending from the home team, they couldn't stop the Human Blitzer from scoring the equaliser with only one turn to go.

One turn is all that is needed, though, when you have a Troll and a Goblin on the team.
The Bruisers's had read the play and set up accordingly. The Krunchaz managed to get the ball to the Goblin, the Troll picked up said Goblin... and tried to eat him!!!
Luckily for the little blighter, he managed to squirm free and land uninjured, if somewhat traumatised from the experience.
And so the two teams parted, with one touchdown each, one casualty each, and one league point each.

Thanks for a great game, Harald. :)

Posted by Christian Schwager at 23:41