So, the other day my Nurgle team took on my friend Maze's Chaos Pact in the Open Division of the Munich RumBBL.
We were keen to try out some of the shiny new components from the 2016 set. Out came the new pitch & dugouts (which are all huge), as well as the new dice. Maze used the Human dice and I used the Orc ones...
The Chaos Pact Minotaur started things off with a glorious roll of Double Skulls, which kind of remained the theme for the rest of the game. Honestly, I've never seen this many Attacker Down and Both Down results in a single game of Blood Bowl. There is something wrong with those dice, I swear!
Anyway, in the end I rolled a few more of them and was soundly defeated.

The artwork below is my visual summary of the match. ;) 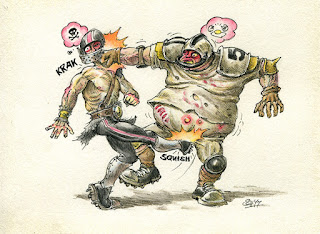 Posted by Christian Schwager at 20:32