Well then, here's another wee report from Nuffle's field of blood-soaked glory.

Of the 12,000 fans who came to witness the encounter between the Grünburg Bruisers and Thorgrim's Grudgebearers last Monday 10,000 of them were Humans, giving their team +2 FAME for the match.

The Dwarves won the toss and elected to receive. They promptly put the hurt on as the ball came down from the kick-off, sending one Bruisers Lineman into the Dead & Injured bin and two more on their faces before the Humans knew what was happening.
Grünburg, however, managed to regain some composure after the initial shock and put the Dwarves under pressure, making them drop the ball twice in a row. The ball remained well-shielded amongst the Grudgebearers, though, and they continued to make slow progress into the Bruisers' half.
As time was starting to run out in the first half, the Grudgebearer's made a break for it, which turned out to be their undoing. The Humans managed to knock the ball free and recover it. A Blitzer passed the ball to a lone Lineman in the Dwarves' backfield, but he dropped it. Moment's later. Bruisers Blitzer Thorsten Tausendteufel swooped past him, picked up the ball and ran it in for the halftime lead.

The second half saw a reverse of the initial Dwarf onslaught from the first kick-off. Grünburg's initial assault put several Dwarves in the KO'd bin and one more went off the pitch with a Fractured Skull (-1AV + MNG). The team's apothecary tried his best to put the Linedwarf out of his misery, but the bugger just hung on and refused to die.
Thorgrim's lads gave as good as they got, though, and more Humans left the pitch for the KO'd box as well. Nevertheless, they steadily worked their way towards the Grudgbearers' endzone... and even found time to pose for some fans before increasing the lead to 2-0.
The fans were cheering and earned their team another re-roll at the next kick-off.
The Dwarves tried again to close the gap and score a TD before the final whistle, but the Bruisers' defence held solidly and the way was just to far for the stunted ones. 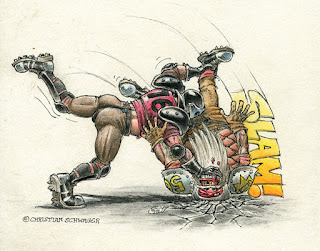 The above illustration shows Hagen 'Killer' Nibelung breaking a Dwarf skull in style.

Thanks for looking. Feel free to let me know what you think. :)

Posted by Christian Schwager at 07:18