Since coming back to Germany I've been looking around the local-ish gaming communities for some new buddies.
I've already found a fantastic group of individuals to play Blood Bowl with, in the shape of the Munich RumBBL. In addition to those lovely folks, I've also come across a number of clubs in the greater Munich region, who play a more varied range of tabletop games.
Although I've only made contact online so far, I've received a right warm welcome from the Weiss Blauen Strategen, also in Munich.

It just so happens that one very enthusiastic individual from that club is organising a campaign for Necromunda, a game that I've been wanting to play for yonks now.
Not only that, but the organiser is also putting a lot of thought and effort into the creation of a suitable background for the event. The theme is Faith, Treachery, and Heresy... which is, of course, right up my alley. :D
I've had quite a few of the old Goliath models lying around for the longest time, so I decided to give these guys a go for the campaign.

Now, since most of the models I have are the plastic ones that only come in two poses with different weapons options, I'm wanting to personalise those models a little more.
During my recent holiday in Bella Italia I had some time to think up some ideas on how to pimp my gang... with minimal effort. I did a bit of doodling and you can see the results below. Let's see if I can translate some of those ideas into miniature form. 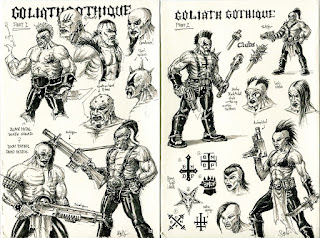 When I came back from my holiday I immediately picked up a copy of the new and (very much) improved White Dwarf magazine, which came with a free Slaughterpriest miniature. Well, this guy is just begging to become the oversized leader of my gang. I've already started chopping and glueing, and hopefully I can work up a sketch for him soon as well. Watch this space...

PS: I would love to do a female ganger like in the sketch, but I just can't think of a good (suitably muscular) base model to use. If anyone has any suggestions, I'm keen to hear them.

Posted by Christian Schwager at 20:43